His Excellency Ambassador Sidique Abou-Bakarr Wai presenting to President Donald J. Trump his letter of accreditation as Ambassador Extraordinary and Plenipotentiary to the United States of America 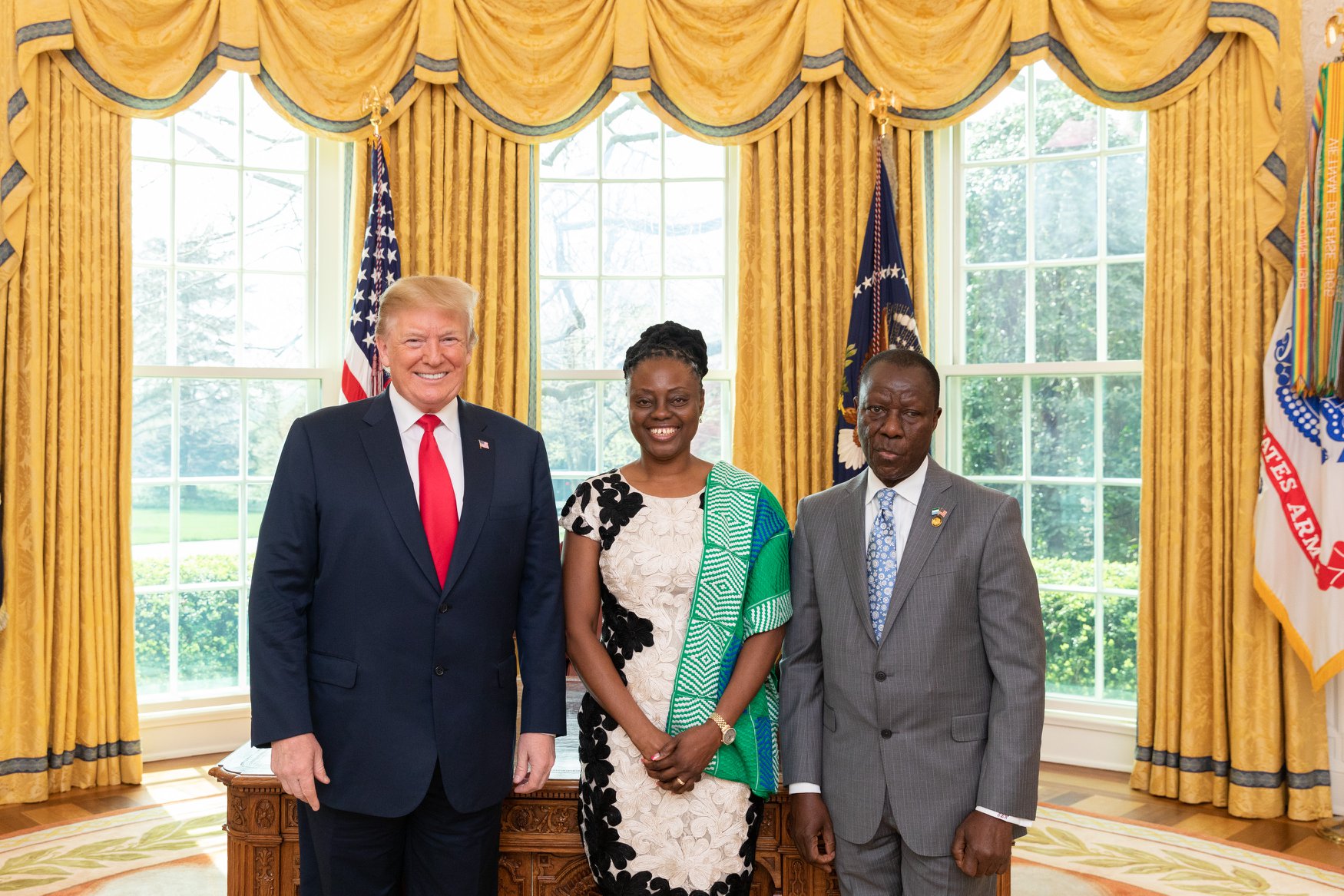 Presenting his letters of credence and that of the recall of his predecessor, Ambassador Wai conveyed to President Trump on behalf of His Excellency Rtd. Brigadier Julius Maada Bio best wishes for President Trump’s continued good health and success in all his endeavors.

Ambassador Wai enumerated the incidents both historical and current that have led to the establishment of the excellent bilateral relations between the two countries particularly the Gullah people connection who reside on the Islands of South Carolina and Georgia, descendants from present day Sierra Leone during the Atlantic slave trade. The story of the Amistad, he said, adequately demonstrate the early connection between Sierra Leone and the people of the United States.

Ambassador Wai lauded the invaluable support rendered by the United States during the fight against the Ebola epidemic in West Africa and Sierra Leone in particular from 2014-2015. He thanked the United States Centre for Disease Control (CDC) and the USAID for donating items including logistics, infection prevention and control, health communication, emergency operations and laboratory systems and support to the National Ebola Response Center (NERC) of Sierra Leone.

Ambassador Wai informed President Trump that the Millennium Challenge Corporation and the Government of Sierra Leone have partnered to implement a threshold program in Sierra Leone. He expressed the hope that the determination of the Administration of His Excellency President Julius Maada Bio to bring free quality school education, promote investment and Trade, agriculture, infrastructure, energy, health, good governance and the fight against corruption will enable Sierra Leone to meet the criteria to benefit from the Millennium Challenge Corporation Compact Program.

In the area of security, Ambassador Wai maintained that President Bio is not only dedicated to maintaining the internal security of Sierra Leone but also the security of the West Africa sub region. He then welcomed the support of President Trump’s Administration to Sierra Leone in particular and the West Africa sub-region as a whole, in seeking to build regional capability to combat terrorism, money laundry, transnational organized crime, human trafficking and public safety.

President Donald J. Trump, in his response, welcomed Ambassador Sidique Abou- Bakarr Wai to Washington DC and said that his arrival demonstrates the more than 60 years of friendship between the United States of America and Sierra Leone. He praised the remarkable progress that Sierra Leone has shown in maintaining peace, strengthening democracy and working towards an environment suitable for economic growth. He said Sierra Leone’s perseverance is remarkable considering the challenges it has endured, including the decade-long civil war, the 2017 Ebola crisis and the tragic 2017 mudslide.

The United States would continue to support President Bio’s efforts in the fight against corruption and to promote economic prosperity for all the citizens of Sierra Leone as good governance and rule of law will be key to success to moving forward.