The Embassy of Sierra Leone in Washington D.C. this week hosted U.S Congressman Gregory Meeks, a Democratic Member of the House of Representatives from Queens, New York, who recently became Chairman of the Foreign Affairs Committee, and the congressman revealed new plans for cooperation with Africa. 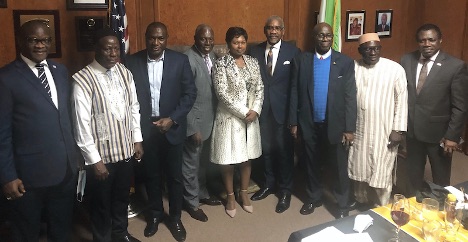 One of the key proposals made by Representative Meeks was an expansion of business involvement of African Americans with the African continent. Congressman Meeks promised to attract African Americans to return to Africa not just as tourists but as entrepreneurial businessmen and women. “Together, we will be addressing food shortage and enhancing agricultural production, monitoring security, climate change, piracy, and illegal fishing in Africa,” he said. “We need strong investment with our African partners.” He cited the support of his colleagues in the Congressional Black Caucus, in particular Congresswomen Karen Bass and Barbara Lee.

The African ambassadors representing their nations in the United States present at the dinner seized the opportunity to present their countries challenges, opportunities, and resources to the Chairman. They expressed their heightened expectation for future collaboration with President Biden’s new administration for the mutual benefit of the 54 countries on the continent of Africa.

The Chairman at this point noted his long-standing friendship with Vice President Kamala Harris which predated her time in the Senate. International security concerns were paramount among the issues presented to the Chairman. Among the potential strategic partnerships with the United States and the individual African governments were military. The African continent is in dire need of enhanced security resources especially in the Sahara region, Nigeria and East Africa in defending their coastal waters.

African representatives promoted the agricultural advantage and potential of the continent calling for partnerships with the United States private sector to ensure worldwide food security in the future. Africa will have the highest number of young people in the world, and therefore education and human resource development must be invested in the continent’s youth. The natural resources of Africa need to be for the benefit of Africans and therefore legally protected; the ambassadors requested assistance from United States in achieving this goal.

Also mentioned in terms of economic development of Africa included the textile industry. The group further appealed to President Biden’s administration to review financial aid conditionalities to Africa. The humanitarian crises along the Mediterranean Sea, with the youth of Africa attempting to migrate to the Western world, placing themselves in great peril and danger, was also discussed. Climate change was extensively discussed, and the expectation for the United States to lead the world in this direction remain a sine qua non to African leaders.

Most of the ambassadors in their individual comments observed that America is still yet to tap into the huge natural, human and economic potential Africa is offering. The relationship between Africa and America should be strengthened, not allowing the existing gap to grow further with China, Russia and other nations rushing to fill it. The ambassadors expressed their frustration in this area to Chairman Meeks over their countries’ recent relationship with the United States through the previous administration. In engaging the House Committee Chairman on Foreign Affairs, Ambassador Wai reiterated the priority areas of His Excellency Sierra Leone President Julius Maada Bio in human capital development, healthcare, agriculture and infrastructure development.

Ambassador Wai thanked Representative Meeks for his role in making the Millennium Challenge Corporation compact available to Sierra Leone. He further reminded the congressman that Sierra Leone is in compliance with the State Department and Homeland Security for the lifting of the visa ban that was imposed on the country since 2017 but there is still delay.

Sierra Leone wishes to take advantage of its deep-water ports, its coastal waters and defend the resources within its’ boundaries. Ambassador Wai stated he has enjoyed a long-standing friendship with Chairman Meeks spanning over 30 years, working together in New York on law enforcement, civil right and economic development issues. In his responding comments, Chairman Meeks thanked Ambassador Wai for giving him the opportunity to meet with this group of distinguished ambassadors from Africa.

Chairman Meeks expressed that it was his pleasure and honor for Ambassador Wai to keep this relationship with him for this many years. Meeks emphatically allayed any fears of the African ambassadors in the United States as he has the fifty-four countries of Africa as a priority of his chairmanship. “My DNA tells me that Sierra Leone is my ancestral land, and my people are from the Mende group, and Africa is my Motherland,” Meeks said. “We are all committed to the development of the African continent.”

Chairman Meeks said his leadership as Chairman of the Committee of Foreign Affairs will promote and change the relationship with the African continent. “I want to work closely with the African Development Bank, African Union, ECOWAS, and other regional groups,” he added. “Through intercontinental trade, we will make Africa economically sustainable and ultimately prosperous. Through partnership, we will work on renewable energy, building institutions and technology. My office will always be opened to you all. I will physically travel as I have done in the past with colleagues from Congress so that we may see for ourselves. One of our priorities is to promote free education for all primary students in Africa.”

The Chairman concluded that the time to promote and enhance relationships between the 54 African countries and the United States is now. “We have a lot of work to do together,” he said.