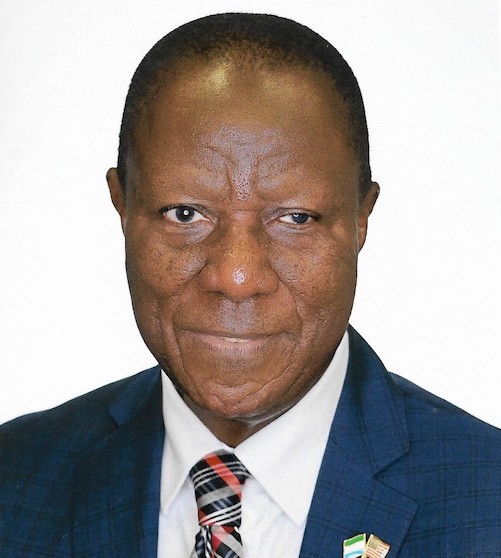 Ambassador Extraordinary and Plenipotentiary to the United States of America

His Excellency Sidique Abou-Bakarr Wai assumed duty as Republic of Sierra Leone’s Ambassador Extraordinary and Plenipotentiary to the United States of America on February 12th, 2019. He presented his letters of Credence to President Donald J. Trump on April 8th, 2019.

Leadership Experience and the Size/Complex of Responsibilities

For over twenty years, Ambassador Sidique Abou-Bakarr Wai has been discharging several high-profile leadership responsibilities in the United States of America (U.S.A.) in spheres of diplomacy, public safety, public health care advocacy, community relations, and social empowerment.  He is likewise the former President of the United African Congress and Community Affairs Analyst and former adviser to the Executives of the New York City Police Department (NYPD) headquartered in New York City. The United African Congress is the Pan African umbrella organization that represents the interests of 3.5 million continental African immigrants residing in America. On the other hand, the NYPD is among the largest police law enforcement in the country with approximately 40,000 uniformed members of service and 25,000 civilians. As a latest addition to this portfolio, Ambassador Wai was recently appointed by His Excellency, President Julius Maada Bio, as the Republic of Sierra Leone Ambassador-Designate to the United States of America.

Experience in Leadership, Diplomacy, and Advocacy for Sierra Leone

Born and raised in Sierra Leone, Ambassador Sidique Abou-Bakarr Wai has for decades been the lead diaspora personality in the United States of America.  He has contributed to the development and welfare of Sierra Leone at critical times through diplomacy and advocacy, particularly during the two most challenging times in Sierra Leone’s history which were the war period from 1991 – 2002 and the Ebola period from 2013 – 2016. One of his profound interventions was during the civil war period, where his behind-the-scene-diplomacy together with diaspora leaders in the U.S.A. opened advocacy through news interviews with the global press that resulted in forcing the Revolutionary United Front (RUF) rebel forces to release several high-profile Sierra Leonean abductees including Dr. Sulaiman Jabati Wai. Among his other noteworthy interventions was during the Ebola crisis.  During that time, he advocated for the interest of Sierra Leone at the United Nations in New York in 2015. The result of which helped build donor confidence towards pledging over one billion dollars for Sierra Leone’s post-Ebola recovery program. In addition, he was able to secure concrete guarantees from donors and the receiving governments towards ensuring that the Ebola recovery process was decentralized, participatory, transparent and accountable.

Ambassador Sidique Abou-Bakarr Wai had studied and earned a Bachelor of Arts degree in Political Science and Pre-Law from Fordham University at Lincoln Center in New York in 1977. He later pursued his graduate studies in Public Policy and Organizational Theory at the New York University Wagner School of Public Service. His over twenty years of professional experience entail a rich career journey that took him from serving as a full-time Deputy Director at the New York University Institute of African American Affairs in 1997 to his most recent roles/positions that include serving as President of the United African Congress and as Community Affairs Analyst and Adviser to the New York City Police Department. Within and between these leadership capacities, Ambassador Wai has been credited for supporting numerous initiatives that added value to the public safety of the 8.5 million people of New York City while also seeking the interest of the African diaspora in the United States of America. These accomplishments included overseeing foreign initiatives for developing nations from Africa in New York such as the supervision of dual-citizenship elections, the facilitation of foreign dignitaries and community leadership requests to meet with the Police Executives. Moreover, he served as the point of contact between the law enforcement apparatus of New York City and the diplomatic communities accredited to the United Nations and the African Union.  Additionally, he mediated public safety disputes between uniformed personnel and civil society on behalf of the Police Commissioner among others.

Ambassador Sidique Abou-Bakarr Wai is held in high esteem by several high-profile and top-notch U.S.A. elected officials.  These include Governors, Borough Presidents, business executives, academic institutions, philanthropists, law firms, labor leaders, Chambers of Commerce and Industries, media executives, executives of international organizations and the various wings of the U.S.A. security apparatus including the crème de la crème African diaspora leadership in the United States of America. Ambassador Wai has over the years leveraged these ties to support the interest of the poor and down-trodden within the African diaspora communities in America in general and New York City in particular. His position and roles have over the years had a profound influence on various wings of the U.S.A. security apparatus to better understand the immigrant landscape and how they can be leveraged to promote Homeland Security.

Highlights of the Top Six Accomplishments